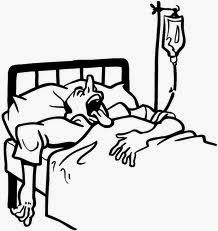 I had the strangest moment of clarity a second ago, wherein I realized that IVs are not part of normal peoples' lives. That, in fact, getting an IV put in your vein is considered an unusual thing by the average person.

Well, that's odd. And it got me thinking...what else in a chronically ill person's life would be considered unusual? It's hard for me to say, since my normal life is, well, normal to me. But judging by other peoples' reactions, I would have to say that the following things are things that, although I may take them for granted, are not normal:

1. Technicolor fingers and toes: When you have Raynaud's phenomena, your fingers and toes turn white or blue when they get cold. Which can happen at any time. And then they turn lobster red if and when they warm up. Very patriotic, if you happen to be American or live in the UK.

2. Having more pill bottles than the average retirement home: 'nuff said. When I travel I practically need an extra suitcase for my medications. And by "practically" I mean "totally."

3. Being so used to having blood drawn/IVs put in that you can tell the phlebotomist which veins are the "good" ones to use. I'm always afraid they're going to think I'm a heroin user or something. Left arm. Yeah, that one. Good luck putting an IV in anywhere else, lady.

4. Fevers. People always look at me with concern when I say I have a fever. As if they aren't an everyday occurrence. Freaks.

5. Wheelchairs/canes/etc. While I'm not using them now, I have in the past, and undoubtedly will again in the future. I have actually been asked if I "actually need that cane" or if it was, I dunno, a fashion accessory? To my credit, I didn't wack the guy on the head. And this was right after a steroid infusion. If that's not self-control I don't know what is.

7. A complete inability to open jars. Apparently jars were made to be opened by human hands. And not by taking the jar and wacking it on the edge of the counter until the glass shatters. I have personally witnessed this miracle taking place, but I cannot explain it.

8. Chronic Fatigue. I told someone that I hadn't gone running because I was too tired, and he asked in genuine confusion (I swear I'm not making this up), "But what are you going to do? Fall asleep while you're running?" Ok, first of all: yes. Second of all...you reallllly don't get the idea of fatigue, buddy.

9. Chemo. Apparently most people aren't on chemo, haven't been on chemo, and really don't know what chemo is like. And they think we're the weird ones.

10. Brain Fog. If you've never arrived at work, opened your handbag, found a tomato and thought, "how the hell did that get in there?" you probably don't know what I'm talking about. You might even think I'm making the aforementioned scenario up. Please allow me to assure you that I am not. Lupus comes equipped with a fog machine for your brain. Everything gets very hazy very fast. Sure, everyone forgets a name now and then, but I've blanked on my sister's name, my significant other's name, etc. Scariest example? Forgetting how to drive a manual transmission while driving a car with, you guessed it, a manual transmission.
Posted by Unknown at 5:32 PM