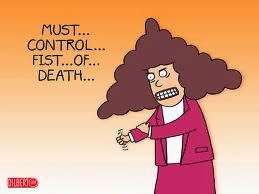 I spend long hours perfecting the art of whining about physicians. It's a hobby of sorts. But I recently realized that healthy people have no idea why those of us with chronic illnesses start foaming at the mouth when someone says the word "rheumatologist." Allow me to give you a short list of some of the most offensive, yet common, things that we lupus patients are regularly told by the people who are supposed to be working to keep us alive. Incidentally, these are also things that you should never, ever, ever say to a lupus patient unless you like being repeatedly whacked on the head with a cane.

Updated from time to time per reader's suggestions.


12: (Not one I've gotten) "You're just a bored housewife." A lot of stay at home moms get this one. Why, I don't know. From my observations on the subject, I would surmise that stay at home moms don't have *time* to get bored. They're too busy preventing the toddler from burning down the house.

11. "You're hypochondriac/It's all in your head/You're just depressed." Yes. Because depression often makes people break out in a rash, have blue fingers and huddle up in pain.

10. "You look fine." No sh**. I look fine because I have to interact with normal, healthy people every day, and I don't want to scare them. (See here for more details on that.) But ask yourself this: would I still look fine without the wig/scarf/hat/etc., half pound of makeup and clothes that cover up my badly bruised limbs? No? I thought not.

9. "You need to try Tai Chi." Ok, I have nothing against Tai Chi. Or Chai Tea, if it comes to it. However, if you're seriously suggesting that my pain will magically go away if I start doing Tai Chi, I want whatever drug it is that you're taking.

8. "You're just stressed out." This is, in fact, true. I am stressed out. Being chronically ill, trying to find a job and having a sociopath physician will do that to a person. That being said, I'm still sick, and it's still your job to make me less so. Hop to it.

7. "You need a boyfriend/girlfriend." No joke, I was once told this (a long time ago) by a physician. Surprisingly, she didn't write a prescription. I was disappointed.

6. "You shut yourself in too much. Go out more." Ok...let's make a deal. You treat me to the point where I need fewer than 16 hours of sleep a day to survive and I'll go out more. Until then, me and my caffeinated self will continue to try to survive school and/or work, 'k?

5. "You should go out in the sun. Just wear a hat and sunscreen." You have *got* to be kidding me. Five minutes in the sun = one week of fevers. Plus I have a history of melanoma. And you're yelling at me for staying inside too much?

4. "Oh, just ignore the fevers [from #5]." Really? I bet if *you* had a fever you wouldn't be here insulting me. You'd be in bed, whining. I have spent months wherein I had to go to work every day with a fever of around 100F. I did my work. I did it well. But I sure as hell wasn't able to "just ignore" the fever.

3. "[Your symptom] is not lupus because I've never seen it before." I'm not even going to comment on this one.

2. "Your [insert blood count here] is in the safe range, so I'm not going to do anything about it." Really? Safe range? While I'm glad I'm not (currently) in the range that means I could drop dead at any moment, I'd really be a lot happier if I were in the healthy range. And that healthy range is 5-10 times  higher than your so-called safe range. That's a problem. Please fix it, or be honest enough to say you don't know how.

1. "I'm going to give you an anti-depressant for your pain." Really. Because that doesn't belittle me or the fact that my body is trying to kill itself. Don't get me wrong, anti-depressants are good things for chronically ill people. I'm on about five of them. But my pain is not all in my head, it is not the result of negative self-image, nor is it going to be cured by giving me yet another psychiatric drug. The pain, Dr. Genius, is coming from lupus, not depression.


As I read through this list, I feel that warm glow of pride that comes from the fact that some variation of every one of these things has been said to me, but, and this is key, I have never been arrested for attempted murder. Not even for assault and battery. Go me.