(How to Avoid) Poisonings in Lupus Patients 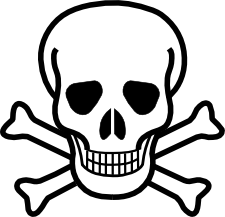 Please excuse my having been AWOL from the blogosphere recently. My current Master's program is rather intense. By "rather intense" I mean "new classes start every eight weeks." Yikes. That being said, this term I've been taking an injury-prevention class. "Injury" as a public health term includes poisonings, as well as more traditional injuries, and the class has made me realize how easy it would be to accidentally poison a lupus patient like yours truly. We are on so many different medications, some of which can interact with each other, that it seems a miracle that more of us are not going the way of Anna Nicole Smith, Heath Ledger and Amy Winehouse.

In order to prevent lupus patients from becoming the newest "accidental poisoning" victims, I've compiled a list of some of the more obvious dangers, and how we can avoid them. This is by no means a comprehensive list, by the way. If you're ever unsure about medications, ask your pharmacist! That's what (s)he is there for, and I always enjoy a good round of "Stump the Pharmacist."

Tylenol/Paracetamol/Acetaminophen (depends where you live):
As odd as it is to think of this common over-the-counter drug as dangerous, it can actually be a potent liver toxin. You only need to exceed the recommended dose by a relatively small amount to put yourself in real danger of liver failure. Why do I pick on this drug for lupus patients? I mean, we all know that it's just a sugar pill when it comes to pain control. Yes, but at least for me it's a dietary staple when I'm running my weeks-long fevers. I count the hours until I can take it again, as the fever normally returns an hour before the next dose is due. Also, there are a few things that some people may not be aware of that make it easy to overdose on this drug.

Methotrexate:
Most of us know this drug. It is a chemo drug often used to treat lupus. And, as anybody who has ever taken this medication knows, it is innately poisonous. That's the point, really. It is supposed to poison enough of your immune system to keep the system from killing your body, but not poison the rest of the body. Of course it does poison other parts of the body, but most doctors (who aren't taking mtx) feel that a little bit of systemic poisoning is worth knocking down our kamakazi immune systems. And they're probably right, although it's hard to agree with them the day after the weekly dose. There are some ways to either increase or decrease your risk of poisoning with methotrexate, though:
NSAIDS (Non-Steroidal Anti-inflammatory Drugs)
Whether they are over-the-counter (Aspirin, Aleve, Advil, etc.) or prescription (Celebrex, Meloxicam, etc.), any lupus patient has had to take NSAIDs at some point. They are the physician's first response to arthritic pain. I've taken eight separate NSAIDs that I can think of off the top of my head. None of them worked for me, but they were worth a try. That being said, there is one danger to be aware of. All of these drugs are related, so it is dangerous to take multiple varieties at once. This is especially true of the over-the-counter NSAIDs; they are all derivatives of aspirin. One of the side-effects of all such drugs is that they reduce your blood's ability to clot. This can be beneficial in small doses, and doctors routinely prescribe baby aspirin to people at high risk for a stroke. However, if you combine, for example, aspirin and advil, your body may not be able to stop bleeding if you have even the slightest cut or bruise. Add that to the fact that traditional NSAIDs really mess up your intestines, and you have the potential for serious danger. So choose one NSAID, and do not take another until after the dosing period of the first one is over.


Interactions:
I don't know about you, but I know I take at least two drugs that may potentially interact. However, my doctors are a) aware of that fact and b) have decided it's worth the risk. Let's hope they're right. They can only make this decision because I tell every doctor every single drug I take. This is why it's absolutely imperative that you tell your doctors about every drug, supplement, alternative medicine, etc. you take. Even alternative treatments can interact with medications, and it's important that your doctor and pharmacist know exactly what you are taking so that they can make informed decisions about your medications.

I'm not trying to tell anyone what they have to do, nor can I say that I have never, for example, taken more tylenol than was strictly wise. But many people are unaware of how easy it is to poison yourself when you have lupus. When you think about it intuitively, it's not that surprising, really. I think I'm on about 15 prescriptions or so (I stopped counting after I passed a dozen; it was too depressing), and it makes sense that at least some of those might interact with anything else I might take. So I can only urge caution, and suggest that you play "Stump the Pharmacist" if you have any questions. It's a lot of fun to see them have to go look up things, actually. Also, it's worth doing your own research. I generally look up any new drug I'm given to see if it will interact with something I already take. I also check to make sure that what the pharmacist gives me is what has been prescribed. I've had pharmacists try to give me the wrong drug before. Do not hesitate to tell a pharmacist that (s)he has screwed up. It could save your life.

Image credit: http://www.webweaver.nu/clipart/img/historical/pirates/skull-and-crossbones.png
Usual Disclaimer: I am not a clinician, and cannot offer medical advice. All opinions or information offered is from my own research, and reflects only my opinions or conclusions. I am not representing any institution; all articles are strictly my own.
Posted by Unknown at 1:09 PM