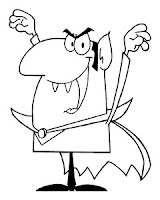 I am very proud indeed to be able to state unequivocally that I have never read nor watched any of the Twilight series. I’m just not a big fan of vampire lit. My reaction tends to be more along the lines of, “I wonder if we throw some holy water on the books to see if they burst into flame.” (As a side note, that is about the  only type of book burning that I would support).

All that being said,  I have read a few books about some undead group or another. And I have to say, whether you’re interested in vampire lit or not, it’s pretty pervasive. An awful lot of angst has gone into writing about the regrets of the poor undead: what they go through, how they miss being alive, etc. ad nauseam. Some of it is well-written; most of it is crap.

But this is a lupus blog. What does it have to do with the undead? Well, fundamentally, lupus patients (and those with similar diseases) are the closest things that exists to the mythical undead. A lupus patient with moderate to severe disease has lost her life. It’s gone. It’s probably never going to come back. She’s alive, certainly, and admittedly does not have to dodge priests with wooden stakes, but her old life is still gone.

Take me as an example, simply because I’m the example I know best. I used to be a rock climber. Now I’m recovering from the second of three surgeries designed to make it so that I can use my wrists. I used to be a runner; on weekdays in the winter I would get up at 5:30 in the morning to take the first available bus in to go to the gym before work. I would run every morning, and then most evenings I spent training at tae kwon do. I was a bicyclist; not a pro, by any means, but somebody who would tackle a 20 mile rides with hills on a very regular basis.  Now I walk with a cane, donated my bike to charity, and have such vertigo that I would probably fall down if I even entered a tae kwon do gym. All of those things, many of which I used to define myself, are gone. That part of me, if not dead, is at least in a very deep coma.

I was also a musician; I took years of private oboe lessons from a professional oboist who has a Masters degree from Juilliard. I kept playing until the pain in my hands and wrists became unbearable. I have at times tried to replace oboe playing with singing, but when you have inflamed lungs and ribs it makes it very difficult and painful to sing.

I used to also be a very regularly attending church member; I have been all my life, somewhat to the puzzlement of many of the scientists around me. Now… well, I was proud of myself for making it to Ash Wednesday service and not having to lie down on the pew out of exhaustion. Many of the people at the service didn’t recognize me because I looked so sick. These are people I used to see every week. I was even on the board of directors of my church, but had to refuse a renomination on the grounds of health. Even something so mundane as attending church every week has become an unattainable goal for me. The old me is gone, and she has been for a couple years now.

You might reasonably ask why I’m telling you all of this; some of it is reasonably personal. The reason is really quite simple. I have been thanked many times by other patients for expressing sentiments and experiences that they and I share, but that they find difficult to express. So, on behalf of patients everywhere, please understand that every seriously ill person is in mourning. We are in mourning for ourselves. We miss the people we used to be far more than you can ever imagine. Just like all those glittery, angsty vampires, a large part of our life is gone. A large part of our self image is also dead.

And for those who are new to the chronic illness experience this means that we are experiencing a time of great pain and of figuring out who one really is, once you remove all of the external activities, hobbies, habits, etc. of life. So please, be patient with us. If we seem moody or as if we’ve changed it’s because we are and we have. We are learning to live a half-life or, hopefully, learning to live a full life, although not the one we had before. Because that life is gone, and it won’t be coming back.