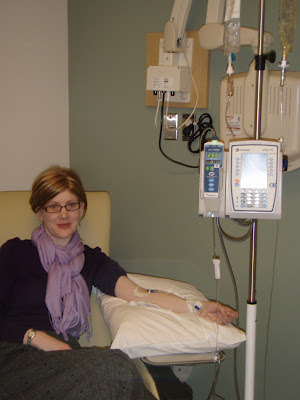 My nurse was rather amused by my request for a photo, but as she said, "Let's hope this photo is a turning point in your life!" I received my first Benlysta infusion today. The whole process took about three hours... and involved benadryl. It makes total sense that they would give benadryl to make sure that the patient doesn't react poorly to the drug. It would also have made total sense to warn the patient (who had to drink a lot of caffeine to be able to drive home safely afterwards) ahead of time. I've been asleep most of the day since then, but I don't know if that has to do with a side-effect of the drug, the benadryl, or some combination of the two (I'd imagine it's the latter).

Other than that minor thing, I have no complaints. The infusion nurse was great, and the only other person receiving a infusion was within a year of my age, so it wasn't one of those awkward "I'm three decades too young to be here!" moments. Also, I have to say that a Kindle Fire is the best hospital toy ever. I could block out all the other noises, read books, read the BBC news, listen to nature documentaries...let's just say I was having a "sleepy chipmunk on crack trying to stay awake" attention span because of the benadryl. But to the person who sent me the Fire, and you know who you are, thank you, once again. Best toy for hospitals ever!

Edit: cute comment from the (not at all overweight) nurse: "When you stand up I want to look at you, because when I moved to VT I was your height and weight, and I want to remember what that looks like."


Edit #2: I just realized that I received my first infusion of Benlysta exactly one year after it was approved. So happy Benlysta day!