I have, quite obviously, spent a good deal of time interacting with various doctors. I've had great doctors.  I have had criminally incompetent doctors...  I have even had a grossly obese doctor who stomped out of the room angrily when I questioned a drug dose, given that that same drug dose had recently resulted in my getting bronchitis.

These doctors are scum. They take someone who is already terrified, confused, and in pain and totally dismiss it all as, “just stress.” (Other variations include, “just depression.”) These so-called physicians completely ignore anything for which they can't, don't know how, or simply won't bother to test. These physicians take patients who are suffering and do their level best to convince them (the patients) that they are crazy. Luckily, most doctors do not fall into this category. Unluckily, anybody with a chronic illness will run into many, many such gems of the medical profession.

My newest addition to the “first against the wall when the revolution comes” list is a neurologist. This neurologist, despite seeing me with a noticeable tremor, having had his colleagues see me shake uncontrollably in the ER for hours, despite having heard my newly acquired sometimes–severe stammer, and despite my having random muscle convulsions strong enough to wake me up every night, has decided that all of my neurologic symptoms are... you guessed it, “just stress.” Oh, except that he was kind enough to take the credit for discovering the carpal tunnel syndrome that was diagnosed about ten years ago.

Stress, of course, can exacerbate most medical conditions, absolutely including lupus. But stress in and of itself is not a biologic mechanism. It has no receptors. It is not the direct cause of many symptoms. It doesn't explain why something's happening; so when a doctor uses it, it's normally because he doesn't want to say, “I haven't the faintest idea what's going on here.” And of course, it has the added benefit of blaming the whole thing on the patient, who really shouldn't be so stressed. This particular neurologist didn't even believe that lupus was enough of a stressor until I explained in short, simple, easy to understand words that lupus means that I am always in pain. Always. And that I have been in such constant pain for the past two years. If you really want a stress culprit, that sounds like a pretty damn good one to me.

I have a lot of doctors, many of which are very good, compassionate, and caring doctors. I appreciate them more than they will ever know,  partly because I have met so many of the other type of physician. But nothing makes me angrier than the “other type" of physician, because of the irreversible damage they do. They damage patients' self-esteem, their belief in their ability to judge their own bodies, and the likelihood of patients seeking out non-jerk physicians. Patients who have dealt with the "other type" of physician sometimes even put their lives at risk rather than risk another such unpleasant encounter.

I've come pretty close to the end of my ability to describe how I feel about the “other type” of physician without reverting to the kind of language I generally try to avoid. But the take-home lesson from a relatively experienced and highly educated patient to any newer patients is simple: if you come across such physicians, run! Run away and find someone competent! Do not put yourself in the position that so many of us were stuck in for years, during which we became half convinced that maybe we really were just crazy. If you're sick and hurting, you're sick and hurting. Any so-called physician who tells you otherwise is not someone worth your time. That is, of course, not to say that any physician who suggests antidepressants or mental health care in addition to other treatments is  a bad doctor. But anyone who belittles you or your experiences, or who blames everything on "stress," “depression,” “overwork,” etc. is not someone you need in your life. 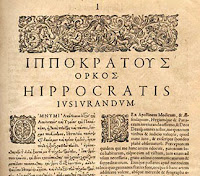 And to the physicians who are not arrogant, who do listen, and who often go far, far beyond the pale trying to help us... well, all I can say is God bless you, every one of you. You are the ones who save lives. You are the ones who recognize and acknowledge genuine illness and pain. You give patients the honor of being treated like human beings, and again, may God bless you for it.