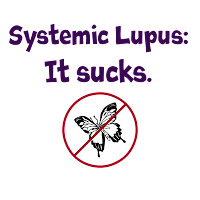 I find that the best way to get someone to so a double-take is to mention some oft-hand fact about my ordinary life. Even people who know I’m sick, know many of my limitations, and are extremely kind about helping me in general get shocked from time to time. So I thought maybe it’s time to put it out there: this is what it means to live with chronic illness. All of the following things are “normal” for us. They are not huge exciting crises that should elicit panic, particular upset or shock from those who know us well.

Lupies (and other chronically ill patients) spend a lot of time in the ER (A&E for you Britishers). It sucks, but there it is. Our diseases have the potential to be very dangerous, and this makes doctors tend to play the “better safe than sorry” game if a new symptom suddenly appears. The fact that we are in the ER does not necessarily mean we are life-threateningly ill; it means that our doctor(s) want to make sure that we’re not. The ER’s job is often to rule out dangerous and immediate complications. If they can do so, we’re chucked out of the hospital. If not, then we’re admitted, and you can worry a bit more. But being ERified, as I call it, is a  common fact of life for the chronically ill.
We really hurt. Since I already wrote about this, I won’t go into it in any great detail, but the fact is that for lupus (or fibro, etc.) patients, we always hurt. Drugs may bring our symptoms under control, but there’s always that underlying pain waiting to flare up again. It’s like during a house-fire, when the fire may appear to be extinguished, only to show up totally unexpectedly somewhere else.
This pain changes how we can interact with other people, particularly romantic partners. And in even the most fundamental ways. Holding hands with someone can be extremely painful if our hands have arthritis. Arthritis is often invisible, so don’t be offended if we wince. Ask. We can tell you ways we can, for example, hold hands, that are far less uncomfortable. But the basic fact is: we hurt. Always.
Autoimmune Diseases are constantly evolving. By this I mean, we don’t get given disease A, with list of symptoms 1-20, and that’s that. We may have disease A this year, diseases A and B, with symptoms 15-40 next year, etc. The diseases change in their various manifestations. Our symptoms vary unpredictably from day to day, and from year to year. Some will get better while others worsen. Why this is, nobody knows. But just because we could do a certain activity last year, doesn’t mean we can still do it. Take home message: ask, don’t assume, when it comes to our abilities or limitations.
Also, because autoimmune diseases are more on a gradient than truly discrete diseases, we often are given new diagnoses to encompass more of our symptoms. This doesn’t always mean that we suddenly have a ton of new symptoms (although that can be the case). It can simply mean that the doctors found a new way to describe the symptoms that were already there.  I’ve got…at least four chronic illness diagnoses that I can think of off-hand. That doesn’t mean I have four distinct diseases, just that I have a whole bunch of autoimmune-caused problems that don’t fit neatly into one disease categorization.
Systemic autoimmune diseases attack the whole body. Don’t be shocked if we walk into work one day with a dramatic new tremor, or stutter. It doesn’t mean we’ve picked up a drug habit, just that our disease is messing with our nervous system. This happens in a lot of diseases, and can be either temporary or permanent. It’s hard enough for us to deal with without having others make a huge deal about it. Same thing is true everywhere...maybe we'll show up limping. Or unable to do anything that require fine muscle groups. It's just the way this particularly rotten cookie crumbles.
Don’t assume that what one patient can do, all can do. My mother and I both have lupus. We have, however, very different symptoms and manifestations of the disease. As an example, my mother can knit. She knits fabulously. She writes books about knitting. Me? I know how to knit, but find it excruciatingly painful to do so. So I don’t. And there are things that I can do, but she can’t. Autoimmune diseases are very skillfully tailored to make each individual’s life that much more difficult. It’s those little personal touches that count so much. *rolls eyes*
The take home message is that the chronically ill lead, as I like to say, melodramatic but fundamentally boring lives. We spend lots of time in appointments with scary-sounding specialists, most of the time it's just like any other doctor visit: boring, running late, and uncomfortable. Yes, we go into the hospital more than the average person does. Yes, we have a lot more surgeries done than most people. But it's all part of the autoimmune lifestyle, whether we like it or not. So please don't make us break out the smelling salts for you every time we mention something. For us it's normal. Annoying, a pain, something we'd love to get rid of, but normal. Human beings, I am here to say, can get used to anything. Try to get used to these things with us, because dealing with a panicking friend when you've just gotten out of the ER for the third time in...not very long, shall we say, is a bit draining.
Posted by Unknown at 9:05 PM