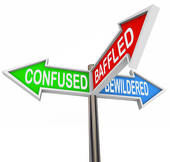 It occurred to me, as I was emailing a family member, how many medical terms, sub- and pre-fixes, etc. I take for granted. I do so because I've been a science grad student for more years than I care to admit. So I thought I'd take a stab at trying to demystify some medical jargon so that it easier for patients to understand. I don't believe in a "doctor knows all" approach, as you may have gathered, and strongly support patient education programs. So here's a (very) limited science-to-english decoder.


Prefixes (or beginnings of words):
As you start to see, these terms are where many, if not all, the specialties get their names.

Subfixes (or things tacked on to the end of words):
Mix-and-Match:
As you can see, you can combine many of the above. Some examples:
General medical terms and/or abbreviations:

I'm sure that there are tons of commonly used words, pre-, or sub-fixes that I've totally missed. Please let me know if there are any you particularly would like to know about, and I'll update the list! Also, if this still seems like an impenetrable list of confusingness, please let me know, and I'll do what I can to clarify things.

*Note: the use of (a) in some places differentiates the British/Irish spelling from the American spelling. Americans tend to drop a lot of vowels that they still use on the other side of the pond.
Posted by Unknown at 10:41 AM