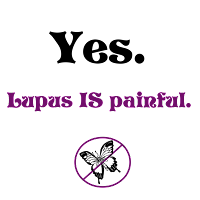 Pleurisy, also known as pleuritis, is so common in lupus patients that it makes the “Arbitrarily Chosen List of Eleven Criteria Used to Diagnose Lupus in the US if You’re Lucky Enough to Find a Doctor Willing to Diagnose You Instead of Just Sending you to Therapy.” (Note, the American College of Rheumatology prefers to use a slightly different title for this list. Mine is way more accurate).
Pleurisy has become an annual tradition for me. Autumn is now characterized by the changing of leaves (still a novelty to this California ex-pat), colder weather, and an invisible hit-man stabbing me in the lungs while his buddy wacks my chest with a sledge hammer. It’s lots of fun. By this I mean that it hurts like hell. Last time I went to the ER for this particular problem they gave me three shots of morphine, ran an EKG, x-ray, ultra-sound, injected me with, and made me breathe in, radioactive compounds, and charged me about $2000…after insurance. I eventually walked out drugged out of my mind, tentatively diagnosed aaaannnnnnnnnnd still in pain. As I say, lots of fun.
Pleurisy can be caused by a number of different problems. In the case of lupus patients, it’s caused by our Kamakazi immune systems deciding to attack the membrane that surrounds the lungs. This results in pain if you’re lucky. If you’re sort-of lucky you also get a “I am breathing but not getting any oxygen” asphyxiating feeling as well. If you’re unlucky, you really aren’t getting oxygen, because the inflammation has caused fluid buildup around the lungs. Just another fun-filled symptom of this lovely disease.
Because lupus pleuritis is caused by a psychotic immune system, its treatments all aim at putting the aforementioned immune system in a nice jacket with sleeves that tie around the back. Or just killing it altogether. Let’s just say that advil isn’t going to cut it. Pleurisy requires the nasty drugs. And so the nasty drugs are prescribed. Many patients with pleurisy respond well to steroids. By “well” I mean, “the pleuritis gets better quickly, but patient feels like (s)he has PMS on crack, is hungry all the time, gains weight and starts to lose bone density.” For others (like me), steroids don’t work. So we move into the immunosuppressant drug category. These drugs would be the ultimate weight-loss drugs if it weren’t for the fact that they make your hair fall out, increase your risk of cancer and teach you all about the joys of dry-heaves. They certainly do decrease your desire to eat, though, that's for sure.
In case you’ve not picked up on this, I’m not feeling particularly perky right now. Lupus sucks, and pleurisy really sucks. Painkillers don’t really work, immunosuppressants make me constantly nauseous, and the constant pain is both mentally and physically wearing. To make it even better, the pain and/or feeling of asphyxiation make my body think it’s in serious trouble (shocking, really), so my heart rate shoots up. Way up. We’re talking hummingbird with a year’s supply of kool-aid here. This means that I get very little sleep. Which makes my lupus flare even more, which makes the pleuritic pain worse. Lather, Rinse, Repeat.
So, once again, my apologies for falling off the face of the earth. But right now the face of the earth is invisible, because I am curled up under as many blankets as possible. If the dry-heave-inducing, hair-loss-and-cancer-causing, probably-demonic-in-origin immunosuppressant I'm on really kicks in, I'll reappear. Otherwise let me reiterate once again that age-old truth: Lupus sucks.
Posted by Unknown at 8:37 PM