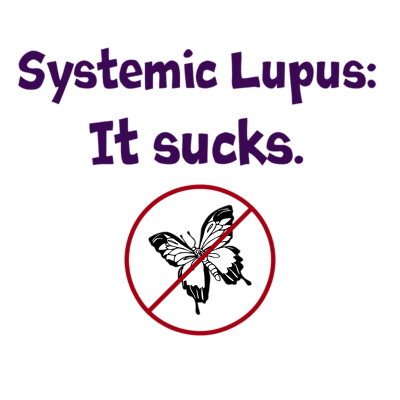 This started out as one post that was going to explain the good, the bad and the ugly when it came to corticosteroid therapy. When I realized that it was going to end up being so long that it would induce a narcoleptic state in even my loyalest of readers, I decided to split it up. So here I offer a general explanation of why prednisone has the side-effects it does. I’ve chosen this as an admittedly non-intuitive starting point simply because a lot of questions on this subject have come up recently in LH/LV. (For those unfamiliar with them, LH/LV are online lupus support forums).

Important note:
All corticosteroids drugs work in approximately the same way. This is not to say that there aren’t differences in potency or tolerability, just that the drugs all exploit the same biological pathways. I will be using prednisone as an example because it’s the drug lupus patients are most familiar with, but the same ideas hold true for methylprednisolone, dexamethasone, etc. All of these work by mimicking a natural hormone in the body called cortisol. Although it’s an over-simplification, you can generally assume that prednisone and drugs related to it do all the things cortisol normally does in the body. Sometimes the terms "steroids," "prednisone," and "cortisol" are used almost interchangeably.

Why take prednisone?
Prednisone is in some ways very good for lupus patients. This is because it can force all different kinds of cells in the immune system to calm down, and because it takes effect very quickly. Unfortunately, the same properties that allow prednisone to have such a broad power over a kamakazi immune system are the properties that lead to serious side-effects.

So…what causes the side-effects, and why are there so many of them?
It would be extremely tedious for me to try to list all of the ways prednisone interacts with different body tissues, and probably even more tedious for my readers. So I won’t. But as a broad overview, cortisol (or prednisone) works as a stress hormone. A certain amount of it is made by the body every day, no matter what. It helps keep various systems in balance. However, if someone is really stressed, (s)he starts making more cortisol than normal. This makes sense in theory: if someone is spending his or her day trying to escape from, for example, a pack of hyenas [which I would consider to be stressful], (s)he will need high levels of energy to keep running. So the body kindly starts producing more cortisol, which serves to increase the level of sugar in the blood (allowing for greater energy for the tissues doing the running), breakdown fat molecules (also allowing for more energy), and even increase the levels of muscle breakdown. That last one may sound contradictory, but it’s not. Breaking down a small amount of muscle helps the running-away-from-hyenas goal because the protein coming from the muscle breakdown is converted into, you guessed it, more energy. In this situation, the hyena escapee really isn’t too concerned about his or her long-term muscle status or whether his or her immune system is working well. The priority is to get away from the hyenas, after which the body will stop producing the higher level of cortisol, and rebuild its stores of sugar, skeletal muscle, etc.

The problem with prednisone, then, is that it works like cortisol, but it’s constantly in the blood, rather than temporarily being spiked for hyena-fleeing purposes. So all of the short-term benefits of cortisol, which are absolutely not designed to be a the body’s status quo, are suddenly present every day, all day. This is bad. People taking prednisone to tone down an autoimmune disease do not want to have their muscles being broken down. Nor do they want their blood sugar levels to go up; that’s useful when running away from hyenas, but not as useful if you’re an insurance agent working in a cubicle. And since (as far as I know) insurance agents don’t run away from hyenas all that often, the prednisone is causing muscle to be broken down for energy, which isn’t being used. So the molecules that represent that energy are turned back into fat, which is dumped in the middle of the body (the trunk, basically), or around the face. So the textbook case of a patient on prednisone shows a person with really skinny arms and legs (because the muscle is being broken down), but large fat deposits around the waist and face.

Sadly, the problems don’t stop there. Prednisone also tells the body to start breaking down your bones for calcium. In healthy people, there’s a balance between bone breakdown and bone formation. As the body needs calcium for other cells, bones are broken down a bit; when the body has enough calcium, the bones are rebuilt. But in a person on prednisone, the balance is broken. Instead of the usual give and take of calcium to and from bones, the “take” switch is always turned on. Again, if your cells need calcium because they’re very active while you’re running away from hyenas, this is fine. It’s a short-term stress response. But prednisone takes that short-term response and draws it out much, much longer than it would generally last in a natural situation. Hence the greatly increased risk of osteoporosis in patients who have frequently been on prednisone.

Tapering vs stopping prednisone therapy cold turkey:
I won’t go into much detail in this post about tapering, but it is crucial that every patient who takes prednisone for longer than a week understand that it is very, very dangerous to suddenly stop taking prednisone. This is because cortisol is a hormone that the body does not store. It is normally made as needed. So when someone is on prednisone, which for all intents and purposes is the same thing as cortisol, the body goes, “Hey, I’ve got tons of this stuff. I’m not going to waste time or energy making more,” and switches off production altogether. As I mentioned earlier, healthy people do make a certain amount of cortisol every day, and it is very important for keeping various systems in balance. So cutting off prednisone after your body has decided to stop making cortisol is very dangerous. Tapering down slowly allows the body to wake up and say, "Oy, I don't have tons of this stuff anymore, time to get to work making more."

Take-home message:
Taking prednisone to treat lupus is like using a sledge hammer to put a pin into the wall. It will often accomplish the purpose, but is likely to leave a lot of collateral damage. This is because prednisone mimics cortisol, which is a naturally occurring stress hormone. Because prednisone has such a wide range of activities in the body, a lot of systems that are normally kept in balance go haywire when someone has an unusually high and long-term concentration of the drug in his or her body. In some ways this is good, as it helps switch off the immune system which, in a lupus patient, is trying to kill the rest of the body. But it also has negative side-effects simply because it’s designed to be present in low concentrations, with only occasional spikes to allow for hyena-fleeing or other physically stressful events. I'm not at all saying that one shouldn't take prednisone if a doctor diagnoses it. Sometimes it's the best (or only) way to get lupus under control. But I hope that this article explains why it has the side-effects it does.

My usual disclaimer applies. I am not a physician. I am a lupus patient with bad brain fog, so I make mistakes.. Please do not ever use my explanations as a substitute for talking to your doctor!
Posted by Unknown at 7:12 PM