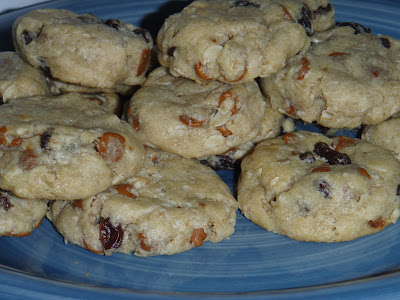 I was recently commissioned by a friend to make cookies for a meeting to which he was supposed to bring refreshments. The only difficulty was that it was a morning meeting, and he wanted more breakfast-themed cookies. We chatted about it and came up with a few ideas, which I will be posting individually.

The first, most obvious, idea was oatmeal cookies... oatmeal is a breakfast food, and therefore so are oatmeal cookies. This is my logic, and it has served me well all my life. I threw in maple syrup for good measure, since it's also a breakfasty sort of flavor. Actually, this isn't exactly the recipe I used for that commission, but it was the inspiration for it and I've since used these cookies for a pot-luck style brunch with great success. The caveat is that these are not super maple-y. If you want a stronger maple flavor you could probably throw in 1/2 tsp maple extract. I didn't simply because I don't have it on hand.

Please do use real maple syrup. I'm not generally fanatical about foods, but there are a few things I absolutely detest: hydrogenated margarine, artificial vanilla and fake maple syrup. This unholy triumvirate may well lead to the decline and fall of Western civilization, if you ask me. 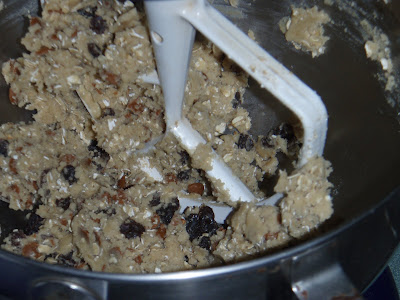 Roll dough into 1-2" balls. Because of the raisins and chips the balls might not be perfectly circular, that's fine.

Squish the balls a little with a fork or your fingers so that they are flat on top, then bake at 350F for ten minutes. 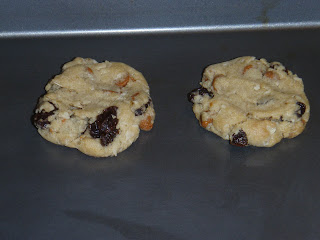 Nom cookies. Not to be arrogant or anything, but I honestly believe this is one of the finest recipes I've ever developed. They really are good.


*Note: I used egg replacer powder and omitted the water. If you're using a real egg you should add a quarter cup of flour to make up for the extra liquid. Otherwise everything is the same.
Posted by Unknown at 7:13 PM