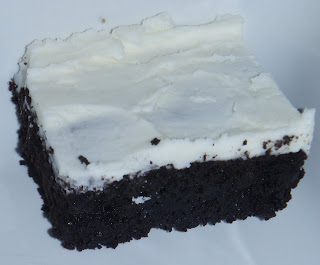 I am quickly discovering that the unifying force behind food blogs is laziness... the only time I am not too lazy to update this page is when people ask me for a recipe. It is at that point that I realize it that it is easier for me to post the recipe once than to have to write it out for multiple people... so here goes, with apologies to my sister, who may have asked me for this recipe about a month ago.

As anyone who has ever cooked with me knows, I am constitutionally incapable of following a recipe exactly. That being said, the King Arthur Flour Brownie Recipe is by far the best brownie recipe I've ever found. I've even been known to follow it exactly. The only changes I made this time were as follows:

1. I decreased the sugar from 2.25 to 2 Cups (just because I really prefer less sweet desserts, 2.25 isn't overly sweet)

2. I used Hershey's Super Dark cocoa (although the regular stuff works fine, I've used it in the past, this results in a VERY dark brownie)

3. I decreased the vanilla from 1 tablespoon to two teaspoons because I didn't want it to fight with the mint icing.

Other than that, follow the recipe as the wonderful folks at King Arthur Flour have designed it. Make sure you give yourself enough time for the brownies to cool completely before trying to ice it, or you shall have a crumbly mess.

I really don't use a recipe for buttercream frosting, which is essentially what this icing is. But basically it is as follows:

Whip the heck out of the following (I use a stand mixer. You can also use a hand-held electric mixture. I suppose it may be technically possible to do this entirely by hand, but I certainly wouldn't try it):

* 8 tbsp/one stick butter (at room temp) (Earth Balance sticks also work. If you ever try Crisco or some equivalent nastiness I may have to hunt you down and beat you with a stick)

* ~3 cups powdered sugar
*1-2 tsp mint extract. I use ~2 tsp, but unless you really like a lot of mint I would recommend using 1 tsp and then add more later if you want it mintier.

Once this has reached a uniform texture and is really, really blended together, add milk until it reaches desired consistency. I add about a tablespoon at a time and then whip it again until it's all incorporated. It should take ~1/4 cup. If you overshoot you'll have a goopy mess. Not to worry; you can add more powdered sugar and fix it. However, with both the milk and the powdered sugar it's a really good idea to only add a little at a time or you'll keep overshooting and end up with a huge bowl of frosting which you will then feel that you have to use/eat. And then your bathroom scale will scream in agony.

Once you have the right texture, taste it to see if you want to add more mint, do so if necessary, and then frost the cooled brownies. I do this by adding about half of the frosting in a thin layer over the top of the brownies, then letting it sit for a minute. I then take a clean knife/spatula and add a second layer. This helps prevent crumbs from getting mixed in the frosting, which doesn't look nice. I have to admit, though, I have a hard time making it look totally even, so don't worry about it if it's not perfect.

Edit: for a variation my family won't make but other people might enjoy, add 1 tsp instant coffee to brownie batter. Then use Bailey's Irish Cream in place of milk in the frosting (and omit the mint extract). You'll need about 2 tbsp, maybe, then switch to milk. This will add an almost negligable amount of alcohol, but it's really good. Basically you'll have created Irish Coffee Brownies. You may have to fend people off with a baseball bat, if my experience bringing these to a potluck is any indication.
Posted by Unknown at 11:31 AM