What to do with mediocre supermarket tomatoes. 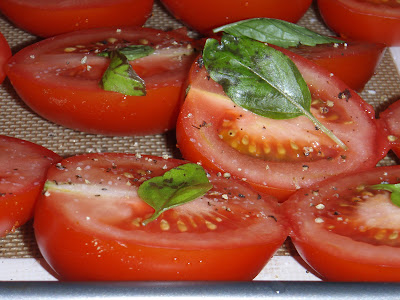 I've seen this trick in any number of cookbooks, and it is one of my favorites. It's hard to get decent tomatoes out here except for a month or two during the summer. What I do to compensate is to buy 2 lbs or so of tomatoes from Costco, slice them in half, then sprinkle salt, pepper and basil over the halves. I then roast them in the oven... 200F for a couple hours is best, but I don't like running the oven that long, so I often roast them at 350 or so for maybe 15 minutes, then turn off the oven and let them cook as the oven cools. Roasting the tomatoes like this concentrates their otherwise too dilute flavor. I use these for everything from salads to soups...or just eat them plain. Guiltless nom nom nom.

Note: roasting the tomatoes can make a bit of a mess on your pan. If you have Silpat (or some other equivalent silcone sheet) I recommend using it, as it makes cleanup a lot easier.
Posted by Unknown at 9:43 PM