So much for the healthy eating resolutions...

Somehow I managed to commit to making two cheesecakes this week... one for church and one for a friend. Here's the first of the two.

Note: I've found that all cheesecakes generally work best if you make them the day before you plan to serve them, and this one is no exception. 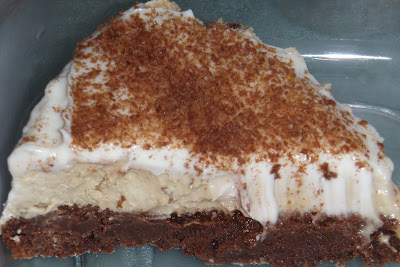 (My apologies for the poor picture quality, this is the lone survivor of the church potluck, as people were nice enough to take home most of the extra so I wouldn't have to figure out a way to dispose of a quarter of a cheesecake all by myself).

This recipe is an adaptation of a much love recipe I found in a bargain priced cookbook at Barnes and Nobles.

Melt together on low heat:

After chocolate is melted, add the following

1 C sugar (I reduce it to ¾ C if I’m not using bittersweet chocolate)
2 eggs, beaten

While chocolate base is cooking, mix together the following:

Add in one at a time:
3 eggs (it works best if these are also at room temperature).

Take 1-2 tbsp instant coffee (I use two for a strong coffee flavor) and add to 1 tbsp boiling water as before. Then add plain yogurt (or sour cream would work, I guess) to a total volume of ½ C. Stir this mixture until fairly well blended, then add to the cream cheese mixture. Mix everything together, then pour over cooked base. I generally give the base about five minutes to cool down before adding the cream cheese mixture, but I don’t think it matters all that much.

Bake cheesecake at 350 for 45-55 minutes or until not quite set. The edges should be set but the center won’t quite be there yet. Run a knife around the edges to prevent cracking, then allow to cool to room temperature. Once it’s at room temperature stick it in the fridge (the more gradual cooling helps prevent cracking). Keep in fridge at least a couple of hours until chilled.

Topping (from Dorie Greenspan's cookbook):
In small saucepan mix the following:
1 ¼ C sour cream (I use low fat)
½ C powdered sugar.
Heat and stir until warm (but not hot) and well blended, then pour over top of chilled cheesecake. Put cheesecake back in fridge for at least another two hours to set the topping. I also grate bittersweet chocolate over the top right before serving just because I think it’s pretty.

Other Notes:
I’ve made this cheesecake without the coffee, and it works great. I’ve also made it without the topping, which is fine. I think the topping is nice when you do have coffee in the cake, though, as you get the three-color visual appeal.
Posted by Unknown at 8:54 PM