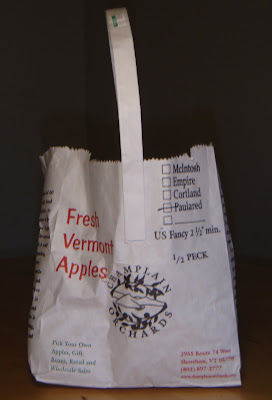 Since I'm a Californian, the idea of "seasons" is still somewhat a novelty for me. That being said, I've found I really enjoy living here in New England, where each season is celebrated in its own way. For me, making apple sauce is a way to celebrate fall (my favorite season, as it's still warm enough to bike but not so sunny as to cause spontaneous combustion in those of us who inherited a skin tone known scientifically as "day-glow white."). This tradition started my first autumn in Vermont, when I made my way to a very remote pick-your-own apple orchard and spent an enjoyable, albeit soaking wet, afternoon picking apples. I then had to figure out what to do with them, as I dislike raw apples.

My apple sauce recipe is pretty basic. I should also stress that this is not a recipe suitable for canning, as I have not included lemon juice or any other acidic ingredient to inhibit the growth of Clostridium botulinum, the organism responsible for botulism poisoning. This is, rather, how I make myself a pot of applesauce to eat throughout the week.

Buy one of those nifty apple-peeler-corer-slicer thingies. Really, it's worth it, and they're not very expensive.

Peal/core/slice about three pounds of apples. This translates to 1/2 a peck, roughly, I believe, although I've never known what a "peck" is. Unit of volume? Weight? I haven't a clue.

Juice from one orange.
1/4 cup dark brown sugar
1 tsp cinnamon
1/4-1/2 tsp cloves (I used more because my cloves are old, so they've lost quite a lot of their original punch). 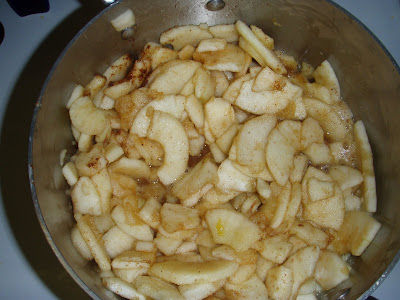 Simmer apples on low to medium heat, stirring when you remember to do so, and (this is important) adding water as needed to keep the bottom of the pot covered in liquid. You could use apple cider to do this; I simply didn't have any on hand. It also occurred to me that number of herbal teas would probably be excellent in place of water as well. The time needed for cooking depends on how high your stove is turned up, and how broken down you want your apple sauce to be. I'd estimate I had it going for about 45 minutes just because I had other things going on. You can also use an immersion blender to achieve a smoother texture sauce. I didn't because I like my apple sauce to still have little recognizeable bits of apples. 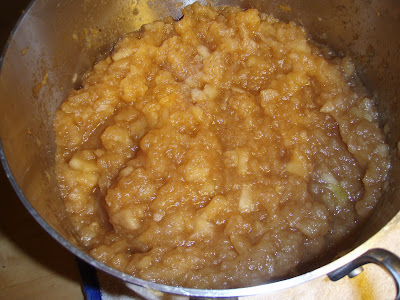 At the end I threw in a dash of (Vermont, bien sûr) maple syrup because I felt the apples were a little tart. If you choose do this please, for the love of all that is holy, do NOT use that awful maple-flavored corn syrup "imitation maple syrup" crap. Use the real stuff or just skip it.

I eat this with plain yogurt mixed in. So...tasty... and healthy, actually.
Posted by Unknown at 6:35 PM